Pathophysiology and Clinical Manifestation of Appendicitis 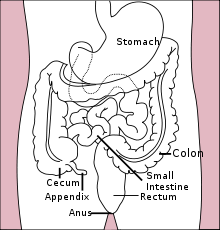 Appendix inflamed and had edema as a result of congestion, possibly by fecalith (hard mass of feces), tumor or a foreign object. Inflammatory process, increased intraluminal pressure that will impede lymph flow resulting in edema, diapedesis bacteria and ulceration of the mucosa cause upper abdominal pain or severe diffuse progressively, within a few hours, localized to the right lower quadrant of the abdomen. Finally, the inflamed appendix contains pus.

When mucus secretion continues, the pressure will continue to rise causing widespread inflammation and the resulting local peritoneum, causing pain under the right side is called acute suppurative appendicitis. If then the flow will be disrupted arterial wall infarction followed by a gangrenous appendix called gangrenous appendicitis. If the walls are already fragile perforated appendicitis rupture will occur. If all of the above process is slow, omentum and adjacent bowel will move toward an appendix to arise a local mass dsebut appendicular infiltrates. Inflammation of the appendix may be an abscess or disappear.

In children, shorter omentum and appendix are longer, thinner wall of the appendix. The situation is coupled with immune system becomes less ease of perforation. In older people perforation easily happen because there is an interruption of blood vessels (Mansjoer, 2000).