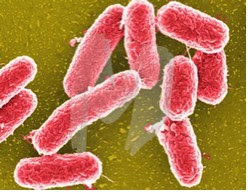 Clinical manifestations of abdominal typhoid in adult patients is usually more severe than in children. Average incubation period of 10-20 days. The shortest 4 days if the infection through food, whereas the longest up to 30 days if the infection through drink. During the incubation period found that prodromal symptoms of feeling unwell, lethargy, headache, dizziness, decreased appetite, and not excited.

Clinical symptoms commonly found are:
1. Fever.
In the typical case the fever lasts 3 weeks. Remitens and is febrile temperature is not too high. During the first week, body temperature gradually rose faithful day, usually down in the morning and rose again in the afternoon and evening. In the second week the patient continues to be in a state of fever. In the third week and the body temperature gradually fall back to normal by the end of the fourth week.

3. Disorders of consciousness.
Generally, patients with decreased consciousness, although not in, that is apathetic to somnolence, sopor rare, coma or restless (except severe illness and delayed treatment).

4. Besides the above symptoms, on the back or limbs can be found roseola, which is reddish spots due to emboli bacilli in skin capillaries are mainly found in the first week of fever. Sometimes also found bradycardia and epistaxis.

Foods or beverages that have been contaminated by the bacteria Salmonella typhosa into the stomach, then escapes from the stomach's defense system, then enter the small intestine, spleen follicles go through kesaluran systemic lymphatic and blood circulation, resulting in bacteremia. Bacteremia first attack Endoteleal reticulo Systems (RES) are: liver, spleen and bone, then later on all organs in the body such as the central nervous system, kidneys and spleen tissue. Bile produced by the liver into the gallbladder, causing cholecystitis. Bile will go into the duodenum and the high virulence of the bacteria will infect the intestine back especially illeum which will form part of the oval and the ulcer. Entry of bacteria into the intestine occurs in the first week with signs and symptoms of body temperature fluctuates in particular the temperature will go up at night and will decrease late morning. Fever that occurred in this period is called intermittent fever (high temperature, up and down and the downs can reach normal). Besides an increase in body temperature, will also happen obstipation, as a result of decreased motility temperature, but this is not always the case can also occur otherwise. Once past the initial phase of intestinal bacteria, then enter the systemic circulation with a sign of increased body temperature is very high and signs of infection in the RES as upper right abdominal pain, splenomegaly and hepatomegaly. In the next week where Focal Intestinal infections occur with signs of body temperature remains high, but the value is lower than the phase of bacteremia and continuous (continuous fever), dirty tongue, the tongue edge hyperemia, decreased peristalsis, impaired digestion and absorption so that it will occurred distension, diarrhea and patients feel uncomfortable, this may occur during intestinal bleeding, perforation and peritonitis with severe abdominal distension sign, decreased peristalsis even disappear, melena, syock and loss of consciousness.
ADSENSE HERE!
Label: Abdominal Typhoid, Abdominal Typhoid - Clinical Manifestations and Pathophysiology
Tweet