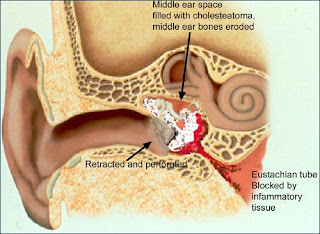 Acute otitis media is often preceded by respiratory tract infections such as sore throats / colds that spread to the middle ear through the eustachian channel.

When the bacteria through the eustachian, the bacteria can cause infections of the channel. So that there was swelling around the channel, channel blockage, and the coming of the white blood cells to fight bacteria.

White blood cells will fight the bacterial cells at the expense of their own, at least to form pus in the middle ear. Tissue swelling around the eustachian cells causes mucus produced when cells multiply mucus and pus, hearing can be impaired because the eardrum and small bones connecting the ear drum with the hearing organ in the inner ear to move freely. Too much fluid, finally able to tear the eardrum because of the pressure.
Label: Acute Otitis Media, Pathophysiology, Pathophysiology of Acute Otitis Media
Tweet